It has been a rather productive time outdoors, as the weather this year has been very generous: not too hot not too cold. We have had around 20-24 degrees mid temperatures, which is a comfort zone to me. At times, it was even chilly to do sports early mornings! Yes, we got quickly used to the warm weather, and I must admit, I use sweaters increasingly more often since we left Northern Europe. Also, the water in the sea – 24-25 degrees – now we use wetsuits for that. Back in Denmark, we were swimming in +18-+19 and were alright 🙂

We have kicked off our travelling season by exploring the region a bit. We visited (finally) Liwa Dessert, to do some cycling in the dunes. It was hard cycling, but it was breathtaking views.  Also, in Liwa, we got invited by locals to their tents to get a tea. And we got to see actual camel farms and did some weird posing pictures with camels. E.g. my hubby got a kiss 😉

Another weekend getaway was going to Sir Bani Yas island, a natural park with at on of animals: thousands of gazelles, different birds, and three cheetahs. Yeah, just three cheetahs, the Kings of the Island 🙂 We managed to see two of them preparing for a hunt early in the morning. Sort of. We took a safari, a night walk, a boat trip… the two days felt like a whole week. And it’s just over 2 hours drive from Abu Dhabi. We will be back for sure – next time with our bikes and diving gear 😉

In terms of sports, we had a number of different events lined up – Dubai 70.3, ITU World Championship, TriYas… improved the results in all of them, and even managed to climb on stage for 2nd place among women in my age group in TriYas, and 3rd place in the ITU among women in my age group.  I’m still far from my goals, but crawling their at a turtle speed 🙂 I’m also proud to set an example for local women. 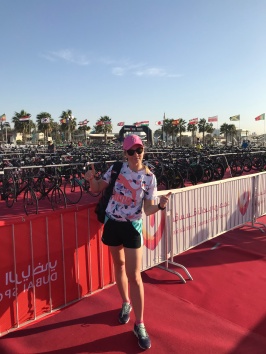 As for the business travels, last year I hit Latin America twice. This year I started by going to China. For the first time in my life I visited Beijing. I was a different experience than say going to Hong Kong. Beijing is the political capital, and you can feel it. Especially in the city center – there is tons of security close to Tianmen square.  The city itself feels like…somewhat coming back to Soviet Union in some areas.

Since I had 2 weekend days in Beijing, I tried to get the most out of it. Firstly, I visited the so-called Forbidden City, the imperial palace. Then the other day I went to the Great Wall with a small tourist group.  Surprisingly, the weather was great most of the time spent in Beijing. Wearing a mask, which many people suggested me do before I left, was not necessary at all. The sky was blue and sun was up.  Spring was totally in the air! 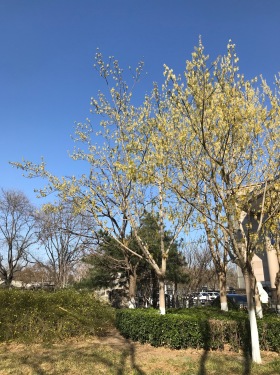 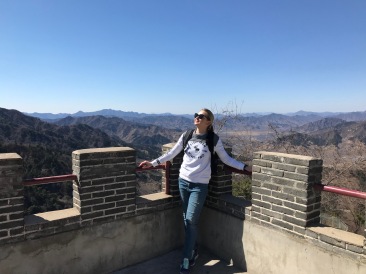 Coming up next? A small business trip to London. Then a short Easter holiday in Lithuania. Then, we finally decided on our big trip for this year – it’s going to Australia, Sydney and Cairns, at the end of Ramadan season, to do some exploring and diving in the Great Barrier Reef. We thought that’s prudent to do before the Reef is totally gone 😉

Other than that, me and my hubby are busy working with Python programming in our “free” time.  It’s a family business now 😉 It does train our brain quite a bit. For the cultural part, we are frequent guests in Dubai Opera and Emirates Palace, which recently hosted fantastic ballet performances from South Korea and Paris. We really don’t miss anything – such great global performers come to visit us!

One more side business for us is producing kombucha, the fermented tea, which I think is part of my improved performance and general better digestion and feeling this year.  I brought a ton of high quality tea from China to experiment and finalize the flavor set before I start to broadly offer my elixir of life to other people. In my approach I am often more like a Japanese: rather 200% than cut any corner I can 😉