A lot of time has passed since mid April when I last wrote, and a lot of things have happened too. We have officially celebrated a year in Abu Dhabi at the end of April, and we have officially passed our second Ramadan here. I was briefly in Chicago for business in mid-May, and we went to Kazakshtan – Astana – at the end of Ramadan, for Eid….But let’s start from the beginning 🙂

Ramadan. Second time we decided to go full fasting except for drinking water early mornings before exercise – as we maintained full exercise routine. We ran 8-11k, we cycled 50-70k, we swam 1.5-2k and so on. Yes, exercising in the mornings meant we had to go to work afterwards and be active for the rest of the day otherwise, because breaking fast (Iftar) was not before after 7pm. And even though work hours are officially shortened during Ramadan, both me and my husband felt we worked – and did – even more during Ramadan. Imagine a day with no breakfast, lunch, coffee breaks…. it releases an immense amount of time and energy. I found my brain works extremely efficiently, and my body felt very good. First few days were weak, but afterwards the inner energy reserves were released 😉

The good thing about saving all that time is that there is time for things you otherwise don’t have time to do – reading, visiting the Louvre museum, going to cinema, spa and massages…etc 😉 We even managed to buy a car, a red one (most important) Ford Escape. And 2 road bikes, Scotts, for some hill and dessert road cycling around. (Triathlon bikes not accepted in some cycling competitions too).

We did plan a small getaway for the end of Ramadan. June 14th – Astana, here we come! Astana is the relatively new capital of Kazakhstan, was moved from Almaty just 20 years ago. It is just 4 hours flight from the UAE, and the temperatures there in summer are quite close to what we are used to in Northern Europe: +10-12 at night, +20-25 during the day. Just perfect.

(There is a reason I’m in sports clothes here. Read on.)

Astana surprised us by all means positively. We stayed in a small cozy boutique hotel Belon-Lux in the city center, overlooking the main square. Initially it felt strange, but later we were surprised by the friendliness of hosts. From the very arrival, when we got screwed by USD 10 by a taxi driver from airport, the host came over to investigate and next day went to the taxi firm to get the USD 10 back for us!  Breakfast in the hotel was like at home – on demand, freshly baked buns, eggs and cottage cheese – the way we are used to it since childhood.  The room was royal. And staff very friendly.

Actually friendly and welcoming is not just the hotel. We found people in Astana everywhere very friendly, always willing to help, from Uber driver sharing “happy banknote”, to an old man who was showing off his eagle in the city – and offered to take us out to steppes outside the city to show us the bird hunting!  The latter was probably the highlight of the visit. I have never seen steppes before – flat and you can see 10 if not more kilometers far. Lots of half-wild horses, many different bird types. But the bird – the eagle – we saw hunting a rabbit – was beyond amazing. Me and my husband even had an idea we would like to have one at home. In the UAE, the rich locals do have falcons, but they cost a loooot of money. I heard the owners even book them separate seats on the planes. Business class. 🙂   Well, one thing clear – it is much better to spend millions on a nice and smart bird than on a car plate with few select numbers, which some people do here. 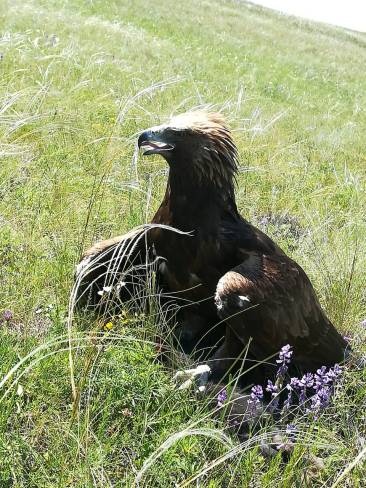 Food in Astana is great and cheap. We ate in the 5-star restaurant at just half the price we would pay for a decent restaurant in the UAE or Denmark.  It’s very much a price level of the Eastern Europe. We were told by locals that Astana is expensive – imagine how cheap it is travelling outside the capital…  And it’s not just cheap, it’s also great: fresh, all natural, doesn’t taste fake as most food in the Western world these days does. It also brought us back to childhood – especially the best ice cream, plombir.  We got half of the luggage packed with stuff we used to see in our kitchens as kids. Purely out of nostalgia.

The city itself is amazing. It’s modern in architecture, almost futuristic. Every larger building is different shape and size. The Presidential palace is gorgeous. The Bayterek tower is one of the kind. And the space is vast. Best of all, to our surprise, despite the buildings, the city is very green – lots of small parks and flowers around. 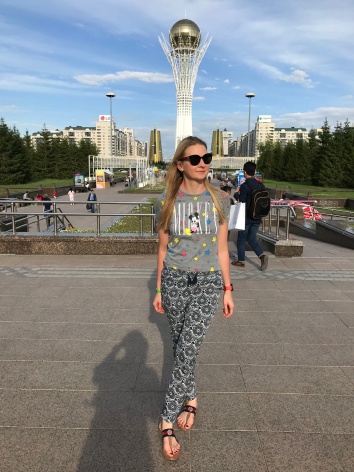 Now…we walked 27km on the first day, and more than 15km every day. We would have walked more if it were not for the fact that we came to a sports competition in this city. Ironman 70.3 Astana on June 17th! What can I say, after a full month of Ramadan, a freezing (to our Standards) river (+17-18), new landscape and strong wind – was a bit of a challenge.  Personally I got some cramps already in the water (not usual for me), but managed to do the swim okay. Bike – very very windy, toward airport around and back. Not as fast as expected – everyone was disappointed, as it WAS very flat road otherwise. Running across the river and crossing a few huuuuge bridges, was a killer for legs.  But hey despite all the pains and grunts, we did it.  The finish line is ALWAYS worth it 🙂 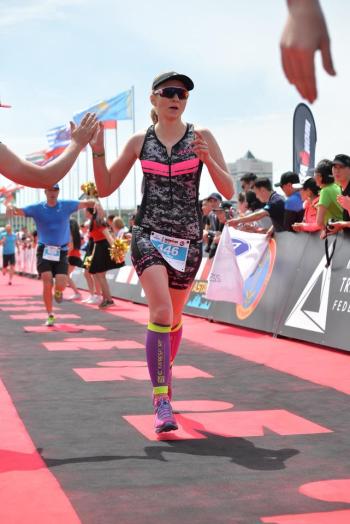 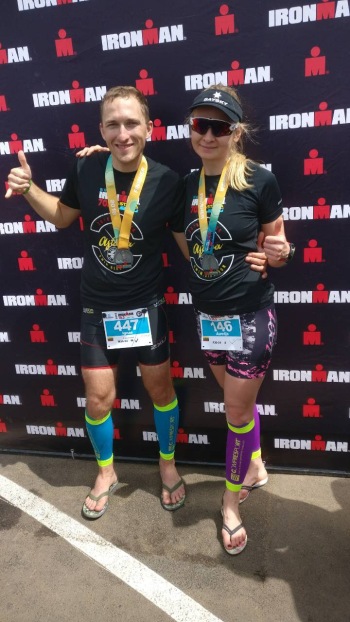 The only cloud for the trip was my stomach. Second day after Ironman, and our last day in Astana, I started feeling sick – no idea why. Maybe it was horse meat the night before, maybe it was just tiredness. I vomited badly and we had ambulance called in. Acute gastritis was the verdict. I left Astana midnight, sleeping on the plane relieved, but very weak.  I blame it all on Ramadan regime – basically, neither during the race, nor after the race, I wanted to eat. But I had to. So my stomach just got shut. Anyway, didn’t take too long – with some probiotics back on track now, and just to get a bit of different routine me and my husband started doing OTHER stuff 🙂

I wish I had more space to tell about the partying we had before Ramadan…but since we have one more Birthday party next weekend in Dubai, I will leave it for the next post.

Last but not least, my husband now found a new job with a startup within Artificial Intelligence in Abu Dhabi, close to my work place, so we will have more time to spend together. But I found, the more time you have, the faster it flies!