Before coming to live in Abu Dhabi, UAE, people often warned me: “but you are going to miss culture!”, “everything is superficial there”, “it’s an empty desert”. Excuse me. For starters, the first book I read was “Culture shock! United Arab Emirates”. 🙂 And there is something to say about it.

So what is culture. Is it buildings? If we define 100-year, 500-year or 2000-year old buildings as “culture”, sure, there is lack of it. The country – United Arab Emirates – was only united/established in 1971. But they do have a culture of buildings, it is either sand, or modern skyscrapers, or villas and residences with a local touch. In one of the latter we finally chose to live in – in St. Regis, close to the area’s best Saadiyat beach where, I am told, we will even see dolphins. For a change. 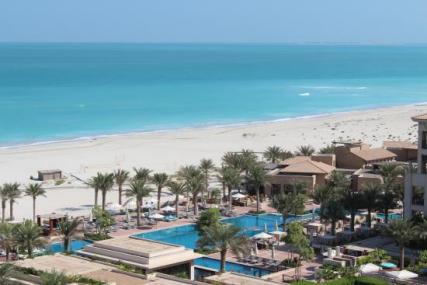 No grand buildings? Sheikh Zayed Grand Mosque was one of the most beautiful modern places of prayer I had ever seen. Last week, when coming from one of the local food restaurants Al Faran, we for the first time saw the mosque in light. Beautiful (mobile pic from a car can’t reflect it, unfortunately).

Figure 2. The Grand Mosque by night

Other masterpieces include the Emirates Palace (former presidential residence, now hotel, where in the restaurant you can try coffee with gold flakes) and the new Presidential Palace where the current President, Vice President and the Crown Prince live. It’s huuuge!

Speaking of our own residence, since we found our own already, now we are preoccupied with finding the right furniture. And while the furniture shops are full of (again, culturally different), style…

We accidentally got to like to something that turned out to be close to home (but not IKEA!)… 🙂

Speaking of local food, it is also a big part of the culture, and it is much different from classical European. Instead of pastas, burgers, pizzas, pork and yellow cheeses with wine…Arabs would eat pita bread, hummus, halloumi cheese, lamb kebab, dates and pistachios in every dessert, and drink camel milk instead of alcohol. Not only they eat somewhat different food, they also eat it somewhat differently. And sometimes fast – like during Ramadan, where they won’t have anything between sunrise and sunset, but then have a mini feast called Iftar. Soon to be tried 🙂 Starting May 26th. I am already skipping breakfast to gradually get there.

Relationship? That is culture, too. Local men and women typically spend time separately here. They always dress their national clothes (women in black, men in white), and have different prayer places and routines. However, that does not mean that expats can’t enjoy their local stuff. We can get a respite in a Western type of “beach club”, which are plentiful here. E.g we are considering joining the Britsh club (recently renamed to The Club), established back in 1962, i.e. earlier than the UAE itself! There we found anything from snooker to a library to a British pub, situated conveniently at the beach open not just for swimming but also sailing and a number of water sports. Culture! 🙂

Last but not least, there is a culture of being multi-cultural. In Denmark, I thought I knew a lot about the world, I was well read and educated in different subjects… here, having spent a couple of weeks with my colleagues, locals and expats, I realized there is still a lot of space for expanding the horizon in many different areas. This also applies to my private investments: “the world is my playground” now 😉

So no, I don’t think I am missing culture, in any way yet. If anything, I am overwhelmed by the new (multi)culture I am exposed to. And humbly look forward to learning more.

One thought on “Culture, what culture?”